AG Gallery is now showing Ken Brown’s original silkscreen prints from 1980s the period when he had intensively worked on large format printmaking.

Ken Brown has been creating films, photographs, cartoons and design objects for over thirty years. Though perhaps best known for his peculiar and distinctive postcards and graphic products including wrapping paper, rubbertstamps, T-shirts etc., he has also had a long career as an independent filmmaker. He produced and directed numerous experimental films, animations, and video documentaries, as well as dozens of short commissions for MTV, VH1, Sesame Street, and other clients. Ken’s photographs, digital editions, and silkscreen prints have been exhibited throughout North America, Europe, and Japan.

We features his silkscreen printmaking that he had worked on intensively in 80’s. 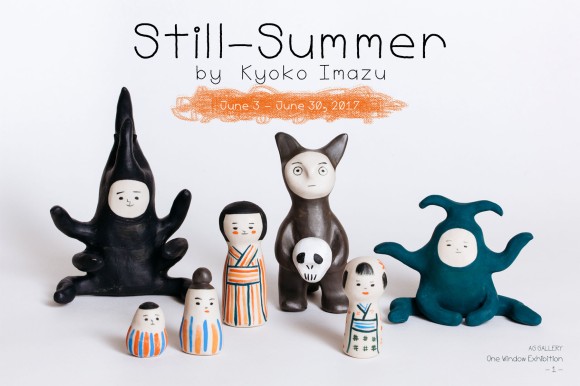 AG Gallery is proud to present “Still-Summer”, a one window exhibition by Kyoko Imazu. Imazu is Japanese artist, printmaker and sculptor, living and working in Australia. She is mostly known for her printmaking and her work has been featured in multiple solo and group exhibitions museums and galleries including Kyoto Museum of Art in Kyoto, Japan, Japan Foundation Gallery win Sydney Australia, Odd One Out in Hong Kong, Davidson Galleries in Seattle, USA, and many more. Imazu has been featured at AG Gallery since 2014, and this is her second solo exhibition at AG Gallery after “World of Kyoko Imazu” in 2015.

“Drawing animals and monsters is one of my earliest and most important memories from my childhood. My drawings include animals like rabbits, cats and birds and also strange creatures, Yokai from Japanese folklore. Growing up in Japan, I was convinced—and very scared—that there were Yokai and other creatures lurking behind me and or hiding in the dark corners of the house. They were as real as dogs and cats.” -Kyoko Imazu

Moving to Australia from Japan as a young adult, Kyoko’s work draws narratives from nostalgic memories of childhood in Japan and features insects, animals and Yokai found throughout Japanese folklore that she read and listened to as a child. Her ceramics bring new life to her two dimensional realm of prints and into reality–the ‘real world’ becomes the playground for her adorable creatures.

This exhibition is inspired with the term “still-life”, the still of the summer night, deep silence and calm; stillness… that brings her imaginative creatures into our realm, quietly awaiting visitors in our gallery.

We are proud to announce our new exhibition “BOOKWORM”, book art by Molly Egan opening on Saturday, May 6th.

Molly Egan is a Philadelphia based painter and illustrator who is known for her pop and colorful drawings and paintings on book pages. Flatness in art is now extremely trendy and somewhat still futuristic expression form in the contemporary art scene, but with the similar flatness, Egan’s work has rather 70s and 80s feeling to it.

Egan’s use of bright colors and large, fun shapes might be what first catches your eye about her work, but it’s her attention to detail and uniqueness of character that really makes them pop. She works in, and even sometimes mixes between, many different mediums, from paint and print, to collage and even pottery and sculpture. Many of the works in Egan’s portfolio are pages from her sketchbook; painted entirely from one corner to the other. However, the sketchbooks Egan uses are not always the accustomed plain paper sketchbooks, but actual regular book-books–with the words still printed on them–as well, which adds an extra texture and collage effect to these pieces. How rare! Egan’s works are an absolute delight. A fruity, tchotchke laden world that we would love to be a part of.

While it is difficult to display an entire collection of her work as they are on book pages, it is our challenge on printing pages out as various sized fine giclee prints, and display so our visitors can see the multiple pieces at one sight. The prints are displayed along with the original book which you can flip through.

Please join at the opening reception and meet her bookworms this coming Saturday, May 6th. 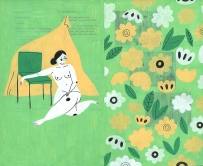 Messengers | A Duo Exhibition by Yuzuru Akimoto & You Jung Byun

AG Gallery proudly presents Messengers, a two person exhibition by two brilliant artists: Yuzuru Akimoto and You Jung Byun. Please mark your calendar and save the date to visit AG Gallery’s new exhibition opening, and enjoy the tasteful storytelling evening with artworks and our artists. The title of this exhibition the title “Messengers” suggests two artists who create artworks with stories, and there are also other messengers, that are the characters which appear in their works.

Yuzuru Akimoto is a Japanese painter and a graphic designer based in Chiba, Japan. He was born in 1977 in Guam, and when he turned three years old, he moved with his parents back to his family’s home, to a suburb in Japan. He spent his youth away from the busyness of urban cities. When he was 19 years old, he moved to Tokyo. He was making Computer Graphics which was a sensational innovation at the time. Later when he was around 24 years old, he started to question the computer technology and graphic design industry he had been working for, that had been continuing to improve but seemed to not know a moment of rest, and thus he decided to go to Setsu Mode Art School to seek a different kind of art from computer graphic.

“When I paint, I try to be fully ready before standing in front of a canvas. I take notes of memories, smells, words, and feelings. I imagine those collected materials as a picture. Each picture has a reason or an event for why it was painted. My painting is a condensed image to keep the memory of the event. One of my goals for making such paintings is to paint a memory or an event as beautiful as or even more than the actual event itself. It is my practice to find beauty in anything that happens around me. Even a mysterious or ugly unpleasant event has its unique beauty if we try to find it. In order to discover that in my paintings I try to make them without too much narrative expression.” -Yuzuru Akimoto

You Jung Byun is a Korean artist, award-winning illustrator and author, You Jung Byun was born in Queens, New York. Byun grew up in America, Korea and Japan, and after getting her BFA from Hongik University in Korea she returned to New York. She received her Master’s degree of Fine Arts from the School of Visual Arts in New York. Her work is recognized for the detailed lines and soft nostalgic colors, imaginative landscapes (such as background images and patterns), and characters and portraits. Today, she lives and works in Brooklyn, New York; enjoying many chocolate nger biscuits and tea, and watching pigeons ghting over stale bagels. Her work has been recognized by various magazines, awards and competitions, including The New York Times, Nobrow, Pick Me Up London 2013, Communication Arts Magazine, Creative Quarterly, Ai-Ap, Society of Illustrators, Society of Illustration LA, & SCBWI (with winning both Grand Prize in Portfolio Award, and Tomie DePaola Award at a same time on 2010).

“I am interested in the mystery around us — like truth, lost memories, lost feelings, or secrets. When I draw I feel like I am reaching out to the air and try to grab the edge of something I miss. I think it’s based on my experience of moving around a lot as a child and have felt the ideal world is always behind me.”-You Jung Byun

Roses on a Winter Day by Sascha Mallon

Roses on a Winter Day

AG Gallery proudly presents Roses on a Winter Day, a solo exhibition by artist Sascha Mallon. Please join us at the opening reception of this sensual exhibition on Sunday February 26, and meet the artist.

About Exhibition
Roses in this exhibition are a metaphor for the ambivalence of love. Sascha challenges expressing her personal feelings, emotions, and memories about and around love using her narrative drawings and writings which together she calls “visual poems”. In her work, roses appears not as symbol or metaphor of subjective beauty, but as if it is a very sensitive and personal part of herself. Love happens and grows inside and out outside our mind and this show is about the importance of the both side of love. How much can an individual lover put out and share her personal love out of her comfort? How much can we understand and how will we receive, analyze, or simply feel them from her work? Those might be some of her and our challenges, questions, and joys in this exhibition.

~Message From The Artist About Roses on a Winter Day~
Roses represent the mixture between beauty and also the pain that comes with too much attachment to people. It is attachment, not true love, when there is pain.
Winter represents the absence of love. The beauty of roses reminds me of the beauty of the heart. Flowers are vulnerable and the roses usually sleep in the winter. Coldness represents the busy life where people don’t have time for each other, or it can be the absence of love for other reasons. The roses sleep until there is spring again. Love comes in cycles. As love is one of the central things, I like to think about roses on a winter day seems to be the perfect title. I think in live all is about love, or what we think love is. It is about the love we feel, the love we think we don’t get, or the love we are not able to give. I think everything is about love, because when we truly love we are happy and kind to each other and then the roses even bloom in the winter.

About Artist
Sascha Mallon is a Brooklyn based visual artist who also works as a hospital artist-in-residence at a cancer center doing art with the patients.