AG Gallery is pleased to announce a solo exhibition “Half Human” by a Japanese contemporary artist Natsumi Goldfish, opening on November 3, 2018.

“We are always humans as a whole and as individuals. What is human being anyway? Is original human-ness of human being still present? It seems like humans are trying to erase some part of human-ness of individual human beings from our gene, in order to develop an ideal human society or human as a whole. If a human society is formed by the humans, by discarding or neglecting some basic human nature in our gene, we are also going to retrogress the society in the end, aren’t we? We are always half human since the moment when we are born, but perhaps the other half depends on each of us.”-Natsumi Goldfish 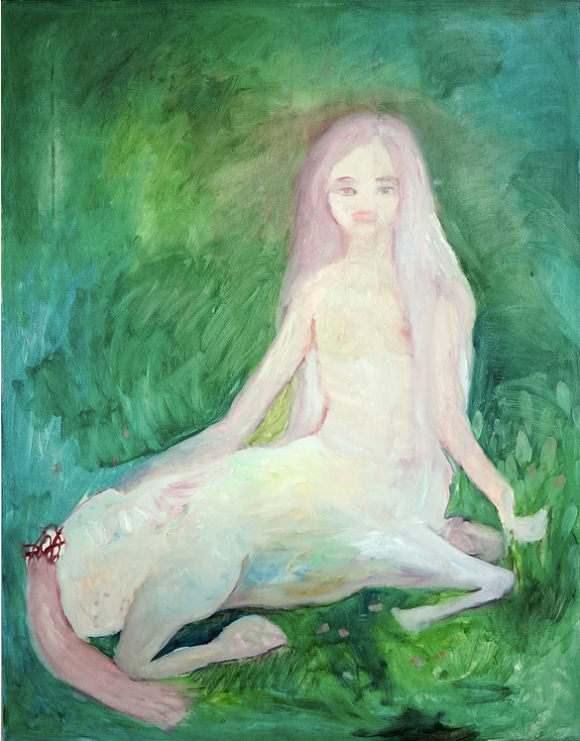 Humans are highly social creatures and for centuries we have been making societies from the earliest band societies: hunter-and-gatherer societies, to agricultural societies, to contemporary societies today. Human existence has been sustained by the communal living. Human as a whole has developed and improved with technology, science, and economic systems, that have made our individual life easy and convenient. Individual humans, on the other hand, have not changed so much, nor improved the inner abilities or physical appearances in any drastic way since we have identified ourselves as human. As society developed, the roles and values of humans have changed. Humans have lost the opportunities to utilize such inborn qualities of human beings. What individual humans have been offering like imagination, curiosity, ideas, and craftsmanship seem to be not essential anymore to live. Without one of us, without you or me, the society will function and will improve no problem. The most of roles available in the society is some kind of consumers. Perhaps we should have never take for granted our ability to imagine, or to be human, even if the society that does everything for us. Human’s inner abilities and senses have been less practiced and stagnant. As an evidence, we used to do only things that we know how or used tools that we can make, but today we do everything we do not know. Our lives are convenient with the science and technology that offered by the society, but we do not know how to make them nor the fundamental structure of them. We know how to grow plants from seeds bought at a store but many of us do not know how to harvest seeds from plants. Many of us rely on medications to recover from sickness, but we cannot make nor know the detail ingredients of the white pills prescribed by physicians. Most of us know how to use a smart phone, but we cannot make one from scratch. We can turn on a light but we cannot make a lighting system or a light bulb, moreover the electricity is sold and supplied from other source. Just like humans have been modifying nature and other animals, I feel like humans societies are trying to modify some part of human nature. Something might be fading away from our gene even this moment.

ABOUT ARTIST
Natsumi Goldfish is a contemporary Japanese artist based in New York City. Goldfish grew up in the fringe of Tokyo, a place of between of all, where nature and urban culture, and many different elements coexisted. The environment inspired and educated her to believe in pluralism, or something close to the idea of being between and both. In 2011 she moved to the United States. In 2013, she received her B. A. in Art from Tyler School of Art. Goldfish primary works with oil painting. Her creation is based on her interest in conscious and unconscious human behaviors seen in the history as well as in her ordinary life.

Cat Art Prints by Agnes Bodor from her original watercolor paintings. Affordable than the her original paintings but looks great and perfect art gift idea for yourself or for your loved ones. Available @aggallerybrooklyn
Come to see the whole view of this integrated drawing @aggallerybrooklyn “ENTANGLEMENTS” by Erica Linnemann is opening tomorrow. Artworks are in the main gallery at downstairs and also in the gallery show window space visible from the street. GALLERY HOURS:12-7pm Daily.
Last two days for “The Washington Square Variations” by Miguel Pang. This show has been spectacular, thank you so much for all who visited and enjoyed the show. It’s nice to see New York themed art of our favorite park, Washington Square.
Come see the Washington Square series art by @miguelpangly this weekend @aggallerybrooklyn