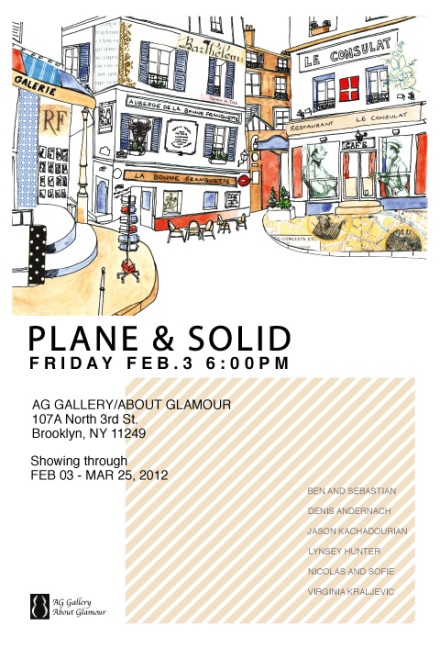 All the works on this exhibition have in it some of the elements of “Architecture” in different ways. Even before we discovered the beauty of architecture and started to studying and experimenting it as an academic topic or media of art, humanity have been trying to create tons of architectural designs in different shapes and materials for its purpose of use and intellectual climate.

Also, architecture have always been considered a part of landscapes and one of major subjects for artworks. Because architecture has both aspects as being an artwork itself and a subject for artwork, also naturally it has phases from 2D image on blue print to 3D structure when it built, the works selected for this exhibition have a variety of media and shapes from plane to solid.

DENIS ANDERNACH
Denis Andernach is an architect and illustrator living and working in Germany. He creates all black and white drawing of landscape houses using clearly defined sharp lines which would be considered formal studies in idealized landscape.

LYNSEY HUNTER
Graphic designer & Illustrator based in South Leicestershire, where she lives with her boyfriend and their crazy cat. She loves to draw anything that inspires her, this is mostly any interesting architecture. Her illustration use an eclectic mix of printed papers, quirky vintage imagery, old–fashioned fabrics, stitch work and her own style of linear drawing mixed with watercolors and collages.

JASON KACHADOURIAN
Live and work in Brooklyn, NY. His work, in a broad sense, analyzes the blurred line between natural and artificial, but more specifically deals with the chaotic organization that reigns in a city like New York. The pieces vary in medium and media, but closely follow a set of guidelines and ideas that make them cohesive when shown together.

VIRGINIA KRALJEVIC
Illustrator and visual designer based in New York City. After studying in Paris and New York, she worked alongside some of the world’s most renowned names in publishing, fashion, retail, and television. Her pen and ink drawings and custom illustration on view now.

BEN AND SEBASTIAN
The partners behind the interdisciplinary art duo ‘benandsebastian’ are Ben Clement and Sebastian de la Cour. They are based in Berlin and have been exhibited in gallery and museum contexts in Berlin, Copenhagen, London, Milan and Tokyo. The duo is currently exhibiting at The Museum of Art and Design in Copenhagen and in May they start a 4 months residency at the ISCP (International Studio and Curatorial Program)  in Brooklyn.

NICOLAS AND SOFIE
“Bewilder & Pine is a dream collective of four making hands, one big black cat, and countless fear-eating-love-machines.” They are two artists and one cat (Mr. Burnside) who found each other in the wilds of the Great Northwest. Their creation shares some of the mysterious and wonderful things that pass through their hands.
Contact/Appointment:
Chiharu Aizawa
AG Gallery/About Glamour
chiharu@aboutglamour.net