a group exhibition: object and space 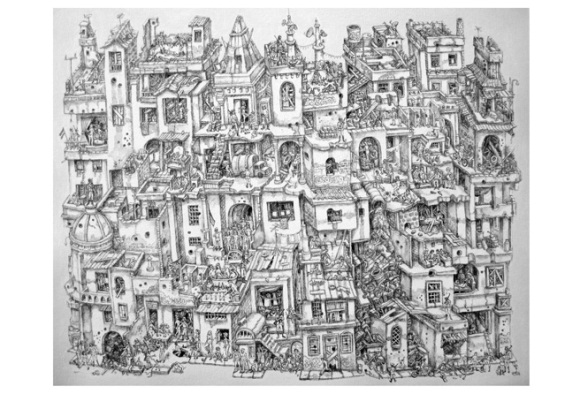 A group exhibition, “CLUSTER”, by emerging artists Alexis Duque, Peter Janssen and Martha Nilsson Edelheit.  The exhibition had shown various ways to portray the relationship between space and object.

Alexis Duque was born in Colombia 1971, he currently lives and works in New York.  His works rely on just a few colors. Notwithstanding the use of acrylic paint, he makes the influence of illustration apparent, equally attending to all of the aspects of the painted surface without leaving anything to chance.  He introduces clustered architectural features that are characteristic of the Western Civilization, from ancient Greece and Rome to the slums of emerging countries.

Peter Janssen was born in Amsterdam in 1951, is known for his high-concept ideas and presentations. Janssen sways between two and three dimension and visualizes order in a chaotic world. His work consists of mainly low-edition print and combinations of paper and canvas.

Martha Nilsson Edelheit was born in New York City. In 1993, she moved to Sweden and currently lives outside of Stockholm. Before her move to Sweden, the dominant theme in her work was the human element, but after her change in residence to the Swedish countryside, animal imagery became prevalent.
The animal as muse remains a continuous part of her work as Edelheit plays with image shape, size, scale, transparency, density and color vibrancy. She also plays with format by expressing her ideas through paintings, drawings, and sculptures.  With her current animal subject, sheep, Edelheit depicts groups of the animal through three-dimensional drawing,painting and metal wire.

A Happy New Year from About Glamour and AG Gallery!
“On the Lake” by Erica Linnemann
Happy beginning of fall everyone! Sharing artwork from our current exhibition “Rats Reconsidered”❤️‍🔥
An exciting exhibition just opened today @aggallerybrooklyn